How Spiders Get Bigger by Molting

January 07, 2015
It had always been a mystery to me how arthropods manage to get bigger by shedding—or "molting"—their exoskeletons. If you're molting an exoskeleton, you're losing mass, right? It makes more sense that an arthropod would get smaller by molting. I've seen spiders before and after molting, but it wasn't until I witnessed a large spider molting that I finally understood what was going on. It turns out that I had seen the process before when a butterfly emerges from a chrysalis.

It is most apparent that a spider's legs get longer after molting. Here are two photos I took of a spider in 2011. Both photos are of the same spider, taken two days apart. The bottom photo is of the spider prior to molting, and the top is of the spider after molting. The measurements given are the lengths of the first legs. The two photos are proportioned correctly relative to each other, so you can visually compare the before and after sizes.

The spider is a male Mecaphesa dubia, which is a kind of crab spider (family thomisidae). In most spiders, the legs get just a little bit longer with each molt, but in male Mecaphesa crab spiders the front legs instantly become very long legs upon molting into adulthood. This spider's front legs became 60% longer in a single molt. I'm not sure how it helps them to have such long legs, but I can attest that the adult males can jump high and far to get away from danger. The long legs may also help the spider to keep a grip on the female while mating.

Mandy Howe, a highly knowledgeable "amateur" arachnologist and the spider smarts behind the public resource www.spiders.us, offered this explanation back in 2011:

Since 2011 I have seen spiders molt many more times. It wasn't until I watched a large spider molt that I could see much of what was going on. I have now seen Mandy's explanation in action. I photographed a large Holconia immanis huntsman spider molting, which you can see in this photo series. Here is one photo from the series: 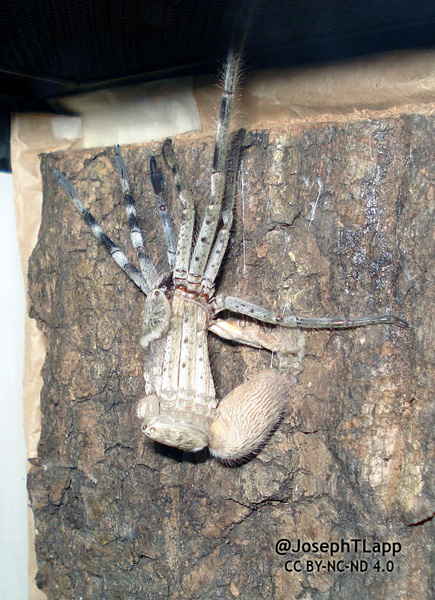 Here is how a spider gets bigger by molting:

So the mystery is solved, and it turns out to be nearly identical to the process of a butterfly emerging from a chrysalis. The butterfly pumps hemolymph from its abdomen into its thorax and breaks open the chrysalis. It then pulls free from the chrysalis, continuing to pump hemolymph. Hemolymph pressure increases the size of the butterfly's thorax and wings, just as it increases the size of the spider's cephalothorax and legs. In the end, both the butterfly's wings and the spider's legs become full size, and both the butterfly's and the spider's abdomens are smaller. Both then wait for their new bodies to dry. However, unlike the butterfly, if the spider is not yet an adult, the spider will go off eating more, growing its abdomen to an even large size, and eventually molting again into a still larger spider. The spider repeats this process until it is an adult.

This post is preparation for my next post, which will be about how spiders regrow lost legs.

(Some notes: Because I don't study tarantulas, I don't know how their process differs. I do know that they often molt by lying upside down, not from a thread. Tarantulas also molt once per year as adults. I don't know if this is true of mygalomorphae in general, which is the group to which tarantulas belong. Also, butterfly caterpillars molt periodically in a similar but less spectacular process.)
spiders

Mexico and the United States are missing a crab spider. It's not the most inconspicuous of spiders, either, being one we should see on flowers. Read on to see how biological taxonomy is sometimes detective work about the names and shapes of things... Summary A fortuitous series of circumstances, along with some sleuthing, reveals that Misumena fidelis Banks 1898 is properly Mecaphesa fidelis (Banks). It is very likely synonymous with Misumenops volutus F.O. Pickard-Cambridge 1900. It may or may not also be synonymous with Misumena decora Banks 1898, which Gertsch 1939 might have mistakenly synonymized with  Misumenops volutus . An examination of the Misumena decora type specimens should resolve that. Mecaphesa fidelis ranges along the western half of Mexico, south to Guatemala, and possibly north into southern Arizona. Last Seen in 1901 Cotype of  Misumena fidelis  Banks 1898, from MCZ There are supposed to be two species of Misumena crab spider (family thomisidae
Read more

July 15, 2019
In the woods there are webs. Some we know well, like the orb webs that spiral to the center. Some surprise us on the forest floor, gauzy sheetwebs that taper to a funnel. Some are messy constructs like the cobwebs in the nooks of the trees. But everywhere, everywhere, strands glint rainbows in the sunlight. Stretching from branch to branch, leaf to leaf, twig to twig, they are the trails of passing spiders. Here is a spider now. She raises her abdomen and releases a line into the air. She waits. The line catches. She pulls the line taut, anchors her end, and climbs across. Once across, she ambles on. Behind her the line reads, "A spider was here." So reads the line before, and the line before that. So reads every line in the forest. The forest is a book written by spiders. It reads, "We spiders are everywhere." (Written on the morning of October 18th, 2009, in the woods of Gus Fruh Park, Austin, Texas)
Read more